Hope Creations is a handicraft business owned and completely funded by a native Afghan woman. The project was initiated in 2010 to empower women by providing jobs through a handmade jewelry business. The project serves poor and excluded women to eradicate illiteracy and poverty, making a better future for them by building hope and peace through business. Fifteen women are employed at present. In addition to providing jobs for women, they also provide free literacy classes and awareness programs on human rights and women’s rights.

Below is a story of one of the artisans

Donia Gul is 45 years old. Her husband was killed when she was 4 months pregnant with her 5th child (she has one son and 4 daughters). After her husband died she was asked to marry one of her brothers-in-law, but she refused to do so.

She was supported by her older brother-in-law to help feed her children. When her first daughter was 12 years old, her brother-in-law told her that he had to arrange her marriage to get money so that he could continue helping them. Donia could not say anything since she was helpless. The daughter got married and all the money went to him. After her second daughter’s marriage was arranged by the brother-in-law, the family moved to the city and there she started going to neighborhoods to wash clothes to earn money. One of the artisans in the Hope Creation group who lived in her neighborhood saw her beading and asked if she would like to join the group. “We welcomed her to the group and she also joined our literacy classes.” At the end of 2012, when her brother in law wanted to marry another daughter, she refused. She was beaten for her refusal, but now she can shout and ask for help in the community. Her son who is now grown up will jump up on the walls and ask for help from the community when his uncle comes to beat his mother. Now everything is changed with Donia Gul’s life. She does not tolerate more violence and will not allow her daughters to be forced in to marriage. She is so hopeful for the future for her two daughters and son that they will go to school and become good people for the community. She is always crying and saying, “my children will brighten my name and will make me proud one day.” 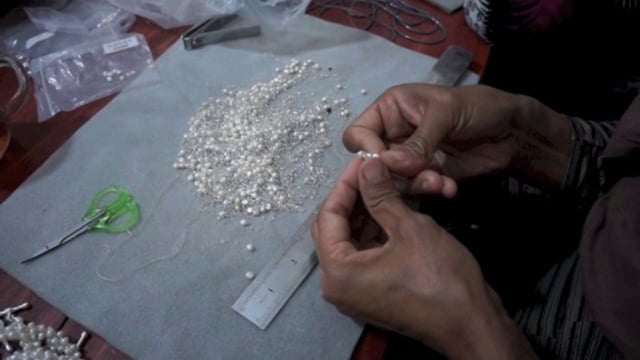